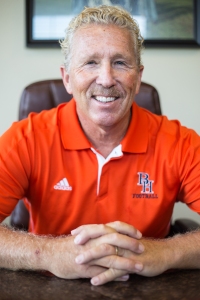 The BH Student section was packed with over 200 rowdy teenagers dressed in bright colors, waving Mexican Flags, and sporting the latest “South of the Border” fashions.

The rest of the gym was filled with Brook Hill parents, grandparents, BH coaches, and a large contingent of fans from our friends across town.

After warm-up music, prayer, The National Anthem, and the introduction of both teams, the large crowd eagerly awaited and hoped for a tough and competitive match between the cross-town rivals.

Five years ago, we began to place a special emphasis on our Girls Athletic Program at Brook Hill.  Most of you have heard this quote from me before that goes like this: “At Brook Hill, every sport we play is the most important sport we play, and girls’ sports are emphasized equally with the boys”.

That quote is not just a catchy slogan that I use or take lightly.

And five years ago, we began the push to raise the level of our Girls Athletic Program.

Several steps were taken nearly simultaneously to ensure the slogan became a reality.

We received a sizeable and generous donation from Clarence and Corene Schwab to build what is now known as Schwab Field and The Scwab Training Center for Girls’ Softball.  AND, we moved the girls field from the back of the campus to adjacent from Herrington Baseball Field to make the girls know they were “right up front…just like the boys”.

Secondly, we started Girls’ Soccer and placed highly successful Brook Hill Boys’ Soccer Coach David Collins in charge of both programs to again give the girl’s the feeling of equal importance.  Coach Collins continues to take the Boys Team to the TAPPS Final Four Tournament, last year finishing as State Runner-up, while the Girls’ Soccer Program laid claim to back-to-back TAPPS State Championships in 2013 and 2014.

While building new facilities and starting new programs, we were also hiring the best coaches we could find to lead our girls sports. Take Anthony Springer.  Coach Springer, who is known as the guru of softball in East Texas and the Founder of the nationally acclaimed Sneaky Cleats Softball Organization, was hired to lead our BH Softball Program, and has systematically brought our girls level of play up to the point of playing in the State Semi-Final Game in 2014, and looks to make a run for the State Crown this season.

We then snatched Ivan Johnson up after 14 years at Dallas First Baptist and Coach Johnson immediately led the BH Girls Basketball Team into the playoffs in his first year at the helm last season. His Lady Guard will be much improved this year.

Coach Johnson also serves as our Tennis Coach and has a stellar reputation as a quality teacher of the sport.

Tiffany Hubbard was brought in after being the Head Cheer Coach at Lon Morris and has grown the BH Varsity Cheer Team to 22 strong, while developing a large group of cheerleaders now leading yells at the Middle School and Lower School.

Coach Tim Moore, who is recognized state wide as one of the top high school Golf Coaches anywhere around, coaches both our Boys and Girls Golf Team, and looks to have several girls to join Sr. Karina Redfern at the State Golf Tourney in 2016.

And last but not least, BH Cross Country Coach Kyle Ford, new to the All ORANGE Family this year, has brought a new enthusiasm and a strong work ethic to our Cross Country Program.  Coach Ford and his kids are out at around 6:30 each morning for their workouts knowing that their sport…running, is other sports punishment.

What a great group of Christian men and women we have leading our Girls’ Programs.

Each of these programs are well staffed, adequately funded, and efficiently equipped so they will be on an equal footing with our boys programs.  As our girls program grows, and as our girls see the emphasis being placed on them by the school, and their coaches, the successes they will achieve will be phenomenal.

We are serious about Girls Athletics at Brook Hill!

Now back to last night’s Volleyball Match with Grace Community; After dropping the first game 20-25, our Lady Guard Varsity Volleyball Team won three straight sets to claim a huge victory over the Cougarettes.

And that’s another reason to be “ALL ORANGE…All The Time”!