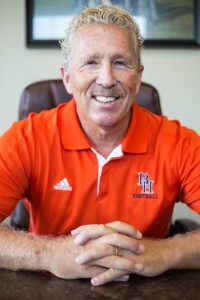 Following a 30 year coaching career in Texas public schools, the last 21 of which were at Whitehouse ISD, Dawkins brings his wealth of experience to Brook Hill after coaching high school football, girls and boys basketball, track, tennis, golf, and baseball.

Dawkins also taught English for 15 years in the public schools along with Health and Physical education. From 2008-2014 Dawkins served as the Head Basketball Coach at Brook Hill, leading the Guard to three Final Four appearances and three Regional Championship games. As a Head Basketball Coach for 33 years, Dawkins recorded 689 career wins and was selected Coach of the Year on 19 different occasions. Dawkins led the Whitehouse Boys Basketball program to 19 winning seasons in a row, and six in a row at Brook Hill.

Under Dawkins, The Brook Hill School has garnished 13 State Championships and 18 additional Final Four appearances in the past eight years. The Brook Hill Athletic Director has instituted an Athletic Program that emphasizes each student athlete’s spiritual growth, academic excellence, and athletic success. Brook Hill also adopted the “ALL ORANGE” slogan and The Brook Hill Yell (YBHR-Yea Brook Hill’s Right) under Dawkins as school spirit has been a major point of emphasis.

All Brook Hill athletes, male and female, participate in Strength and Conditioning classes four days per week in an effort to improve the physical abilities of each athlete while setting a trend of wellness for a lifetime. Dawkins has renewed an emphasis on girls’ athletics, seeing the participation numbers in all female sports increase. Dawkins emphasizes that “Every Sport We Play Is The Most Important Sport We Play and Girls Sports Are Equal To Boys”.

During the past 11 years under Dawkins leadership, numerous athletes have continued their playing careers at the collegiate level. Recently, as many as 9 former athletes competing at the NCAA Division I level in the sports of football, volleyball, softball, golf, soccer, and baseball with numerous athletes competing at the NCAA D-II, NAIA, JUCO, and NCAA D-III.

Dawkins has been married to wife Laurie for 40 years and has two grown children; a son Brady Dawkins who lives in Arlington, and Daughter Hayley Dru Stine who resides in Edinburgh, Scottland.