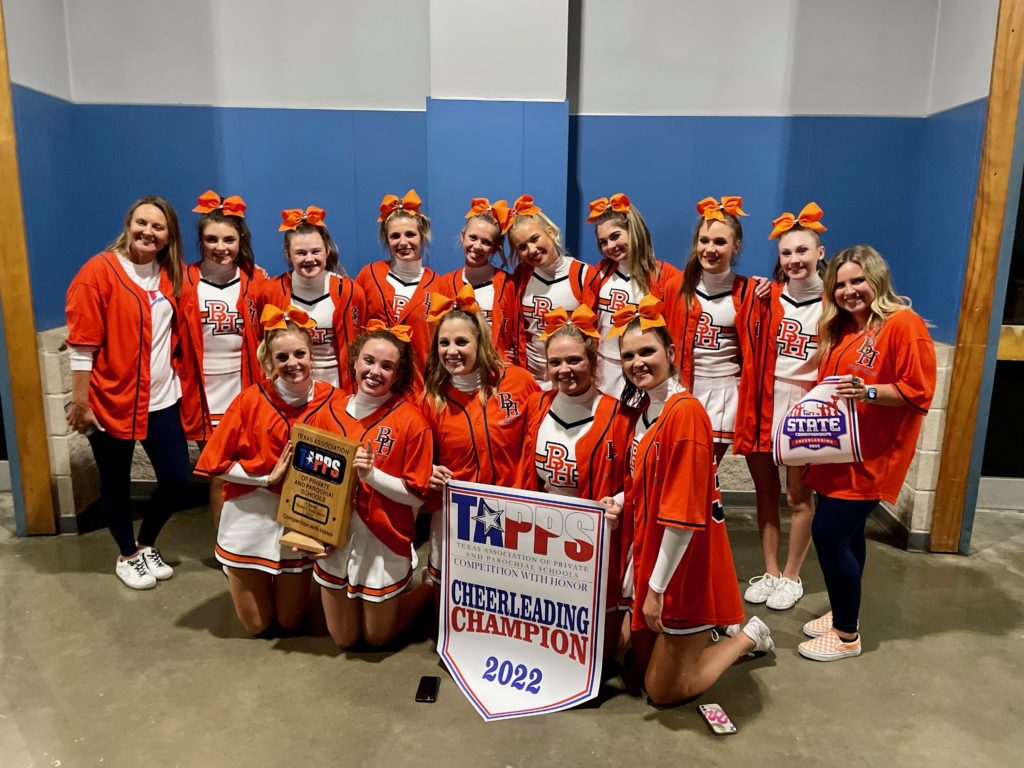 The Brook Hill School Competitive Cheer Squad placed 1st among 12 other teams in the Division IV Traditional Small 1A – 4A bracket at the TAPPS Cheer Championship yesterday. The squad was judged on stunts, pyramids, cheer, dance, tumbling, jumps, tosses, and spiriting – which they received a superior rating on.

Head Coach, Tiffany Hubbard, was extremely proud of her team’s success at competition and expressed how “bought in” each individual cheerleader was to the process. “This team bought into the process early. Our motto all season was LEAVE NO DOUBT,” Hubbard said, “They wanted to go out there and leave no doubt in anyone’s mind who was the best! And that is what they did! Being first in preliminaries is tough, but the toughest is competing one more time and keeping first. I am beyond proud of this team, not because of the championship, but they put in the work and never complained. The Championship just makes it sweeter!”

“I don’t think there are any words that can express how proud they have made us. They were dedicated from the very beginning to give it their all and that is exactly what they did. Hitting a zero deduction routine is hard but to do it twice in one day is really tough and that is exactly what they did to hold first place into finals! The bond of this team is so special and I feel so thankful to have been a part of this program and get to share a State Championship title with these girls and Coach Hubbard,” said Coach Madi Hanks. Hanks joined the squad this year as Assistant Cheer Coach, in addition to her role as Associate Director of Enrollment and Financial Aid in the Business Office at Brook Hill.

“We are extremely proud of our competitive cheer squad and their coaches for their hours of hard work and practice that paid off in a big way at the TAPPS Cheer Championship this year,” said Rod Fletcher, Head of School, “We hope this is the first of many state titles for our cheer team and we look forward to seeing the squad excel in the years to come!”