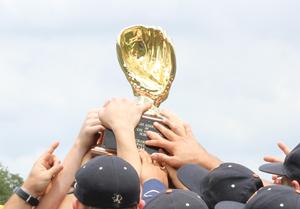 The Brook Hill Baseball program has been one of the most successful baseball programs in East Texas since beginning in 2002. Having won State Championships in 2013, 2012, 2011, and 2004, the Guard has held great success over the past 15 years.  Alongside those 3 State Championships, The Guard have also finished as State Runner-up twice (2010 & 2018), as well as State Semi-Finalists in 2016.  In that time, Brook Hill has held impressive wins over schools from every division of TAPPS and UIL. The program has always strived to seek out quality competition to match our teams up against some of the best talent available.

Brook Hill is excited to welcome Coach Jerry Courtney in his first year as the Head Baseball Coach. “I am so excited to be at Brook Hill and have the opportunity to lead a program with the abundance of talent we have, along with the magnificent renovations to Herrington baseball field which is now a state of the art all-turf complex,” Coach Courtney explains. “This spring promises to be a great one for the Guard baseball program.  Returning All District players, Seth Moss, Grayson Murry, Carson Richards, and Cole Fitzgerald will be leading a group of talented and hungry Brook Hill baseball players.  Guard baseball will be about playing team baseball first and foremost.  I can’t wait for the first pitch of the season.”

Jerry Courtney came to Brook Hill in 2019 after a successful 17 year stint as the Head Baseball Coach at All Saints in Tyler.   His team’s won over 300 games during that time, including 9 District Championships, 5 trips to the State Tournament and a 3-A State Championship in 2009. Coach Courtney is a 2001 […]

Steve graduated from the College of the Holy Cross, where he majored in English, having discovered his lifetime love for the study of Christianity and Literature. He also played outfield for the baseball team, a career that culminated in his playing in the Hawaii Collegiate League, one of the country’s premier wood bat leagues. Steve […]

Steven Lewis is currently in the process of finishing his Bachelor’s degree and strives to become a teacher at The Brook Hill School in the coming years. Prior to his time at Brook Hill, he served his country as a member of the United States Air Force stationed at Whiteman AFB, Missouri. Coach Lewis has […]

Jereme has been involved with the athletic department in a variety of ways over the last three years, volunteering as an assistant football coach as well as helping out with the basketball and baseball programs. Jereme spent the last 14 years self-employed in the oil and gas industry but has now joined Brook Hill full-time, […]

We’re committed to offering excellence in all areas of student life development!   That’s why we’re proud to partner with APEC (ATHLETE Performance Enhancement Center) to offer middle and upper school students the opportunity to pursue health, fitness, and strength with the best of the best! Training sessions are led by APEC coaches and conducted […]

HEADLINES: A MESSAGE FROM THE HEAD OF SCHOOL, ROD FLETCHER If you were involved in baseball in any way last spring in East Texas, you know that it was a frustrating season as far as the weather was concerned.   IT WOULD NOT STOP RAINING!   The Brook Hill Baseball Field was not exempt from […]

From the desk of Wally Dawkins, Athletic Director: We are proud to announce the selection of Austin Reed as the new Interim Head Baseball Coach for the 2018 season. Coach Reed has been a member of the Brook Hill Baseball coaching staff for 11 seasons and has served as an assistant coach for BH as […]

The Atlanta Braves have just announced the promotion of left handed reliever AJ Minter from Triple A Gwinnett. When Mitner was called up to the MLB by the Atlanta Braves on Tuesday, August 22, a moment he has dreamed about since he was a kid became a reality. Just six years ago in 2011 Minter […]

Brook Hill varsity baseball won its way into the playoffs following a three-way tie for first place in the district and went on the road to capture a victory in its first playoff game — the only team from TAPPS Division II District 3 to advance. But the road ended in the regional round. Facing […]

The Guard varsity rallied from 4-2 down to score four runs in the fourth and get past Frisco Legacy Christian 6-4 in the opening round of the TAPPS Division II baseball playoffs. Logan Fitzgerald drove in two runs with Logan Langford accounting for three of the Guard’s 10 hits in the game. Brook Hill moved […]