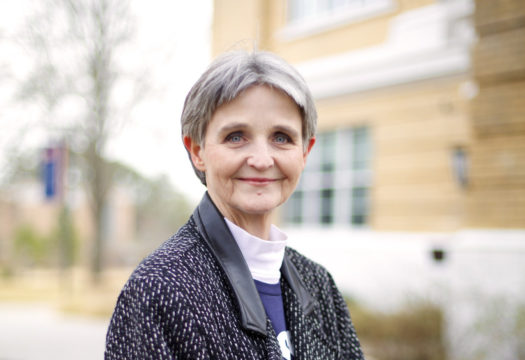 From the desk of Celia Tucker, College Counselor:

A few weeks ago we had the opportunity to travel to Orange, Texas, and work on a house that has been damaged by the hurricane.

Seeing the destruction that had taken place, I just kept trying to imagine what was going through the minds of the family on the evening the waters started to rise. I didn’t want to come out and ask them to retell their story, and have them have to relive the event, but one evening at dinner that is exactly what happened.

Because this pattern was normal for the area that they lived in, they went to bed as usual that night. Why were they to think that it would be any different?

As she continued with the story she explained that she was a hard, hard, sleeper and that she NEVER woke up in the middle of the night—NEVER. She said that a war could be going on outside her window and she would never hear the gunfire—that someone would have to tell her about it the next day. This particular night was different.

About 1:30 a.m., she said God woke her up and said, “You have about an inch and a half of water in the house. It is time to get up and get things in order.”

She sat up on the side of her bed, put her feet on the floor, and realized He was right. God continued with instructions, “Go into your son’s room and get his violin off of the floor so it will not ruin.” She did it.

“Look under the bed and get your family photograph album. Put it in a plastic bag and take it to the attic.” She did it.

“Remember the keepsake your mother gave you? It is in the bottom drawer of the dresser. You need to get it secured.” She did it.

She said she has never heard Him speak so plainly before. She said it was a supernatural spiritual experience. God was telling her to go and get things she had forgotten that she even had. She said His directions were so clear. She was calm, not afraid, filled with peace. We sat there in awe, spellbound and almost envious.

How many times have I wanted God to send me a handwritten letter with instructions or loudly holler down (scream) at me clearly giving me answers to all of my questions? What I learned that evening is that God will speak to me when He knows I need to hear Him. What a comfort. I need to stop worrying.

As I always do, I relate my life’s experiences to Brook Hill– to the students and right now especially to the seniors and their parents.

Every day I hear them talking– Where should I go to college? How do I know if it is the right place for me? What if I make the wrong decision? What if I don’t get into my first choice school? I feel like I am drowning …and on and on and on?

My heart goes out to them but again as I was reminded recently — emphatically in Orange, Texas, — God has plans. What might look like a rejection is really just a nudge to go in another direction. What looks like a disappointment is really a way of saying that maybe that particular college is not the place they are supposed to be. The water may be rising and we may sometimes feel like we are drowning, but rest assured God has a life preserver made especially for each one of us.